The matches usually start at 10 A.M. Mountain Time Zone in Winter and 9 A.M. Summer, but that has been known to change due to the season; it's best to sign up for our emailing list for current start times and dates. We appreciate shooters who show up early to help set up (before 8 A.M.).

Benches and relays are chosen at random by drawing a number from a bucket, so its luck of the draw. Typically we shoot two relays. While one relay shoots, the other relay will pull the targets inside the target pits. If its your first time pulling targets, one of our experienced target pullers will get you onto the right track.

Beginning the match we will have a safety briefing; we follow safety procedures at all times.

We fire 5 shot groups at 600 yards. Before each record target is shot, you will have an opportunity to get sighted in. We fire 4 record groups on 4 different targets, and you will get your targets at the end of the match. If you shoot the top score or smallest group aggregate for your relay, you will be placed into the shoot-off. The winner of the shoot-off will be given a pat on the back and a congratulations from your fellow shooters.

Rifles:
Rifles are typically center-fire bolt action rifles, though we have had semi-automatics such as the AR series. On the line you will see factory hunting rifles and custom tailored rifles specifically made for bench shooting, and anything in between. Regardless of the differences in our rifles, our motives are similar: to gain valuable experience, shoot some small groups, high scores, and especially have fun.  If you have questions about calibers or ballistics we can further assist you via email. 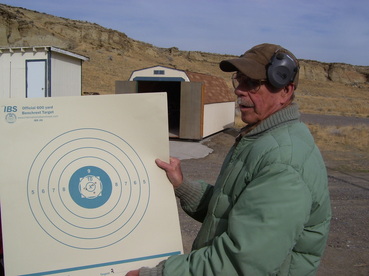 Targets:
Gary displays the IBS 600 yard target that we use (with a fine group and score he shot). We've used this target the last couple of years and it has proven to be challenging. It does however provide a good aiming point with the white square in the center.

Scores:
Scores are calculated by adding up where each bullet lands according to the ring it lands in. For example: If a bullet hole is in the 9 ring, but is barely touching the 10 ring, it is scored as a 10. If two shooters shoot a perfect score of 50 the number of  'X' rings will determine who wins.